History of the farmhouse

Schloss Kartzow is located in the middle of the Döberitzer Heide. This nature reserve is located west of Berlin and in a northerly direction very close to Potsdam.

The first mention of Kartzow dates back to 1375. Only much later – in 1850 – Carl Wolf Stilow has the manor house of the manor Kartzow converted into a “figure-decorated castle”.

In a major fire, the manor house is severely damaged and almost all the buildings in the village, including the stables of the manor are destroyed.
The manor is sold in 1900 to the Berlin spirits manufacturer Arthur Gilka.
Gilka rebuilds the damaged manor house from 1912 – 1914 according to the plans of Eugen G. Schmohl. It served as a country house with 66 rooms.

After the death of Arthur Gilka (1937), the former garden director of Sanssouci, Georg Potente, transformed the Gutspark into a landscaped park.
It comes to ownership changes until the manor house in 1941 is acquired by the imperial ficus.
The Wehrmacht takes over the estate in connection with the expansion of the military training area “Döberitzer Heide”.

After the end of the Second World War in 1947, the demolition of the manor house ordered by the Red Army was only prevented by numerous displaced persons using the building as living space.
In 1949, a children’s welfare home of the people’s solidarity is established in the manor house.
In further use, a nephro-urological pediatric clinic will be established in 1974 in the manor house, which will gain rapid recognition due to its successful activity.
In 1992, the Children’s Clinic was taken over by the Allgemeine Krankenhausgesellschaft (AHG) Saarbrücken, with the assurance that it would build an extension on the site in Kartzow. But that does not happen anymore.
The country house is sold in 1997, but the new owner does not meet his obligations and from 1998 – 2004 the “Schloss Kartzow” is empty.

In 2006, the Sonntag family acquired the castle from the state of Brandenburg and began to renovate the manor house.
On the 2nd of June 2007 the first wedding party takes place in the “Schloss Kartzow”.
From November 2009 to April 2010, the renovation and expansion of the lower floor and the first floor will take place in a second step. The kitchen and storage rooms are newly created in the basement. On the first floor nine double rooms, two junior suites, a suite, as well as a barber and cosmetics area will be built.
The official opening of the Schlosshotel Schloss Kartzow will take place in April 2010.
The award of the Schlosshotel as a 4-star hotel by DeHoGa will follow in January 2012. In November 2014, the opening of the wellness area in the basement of the manor house will complete the renovation and conversion phase. 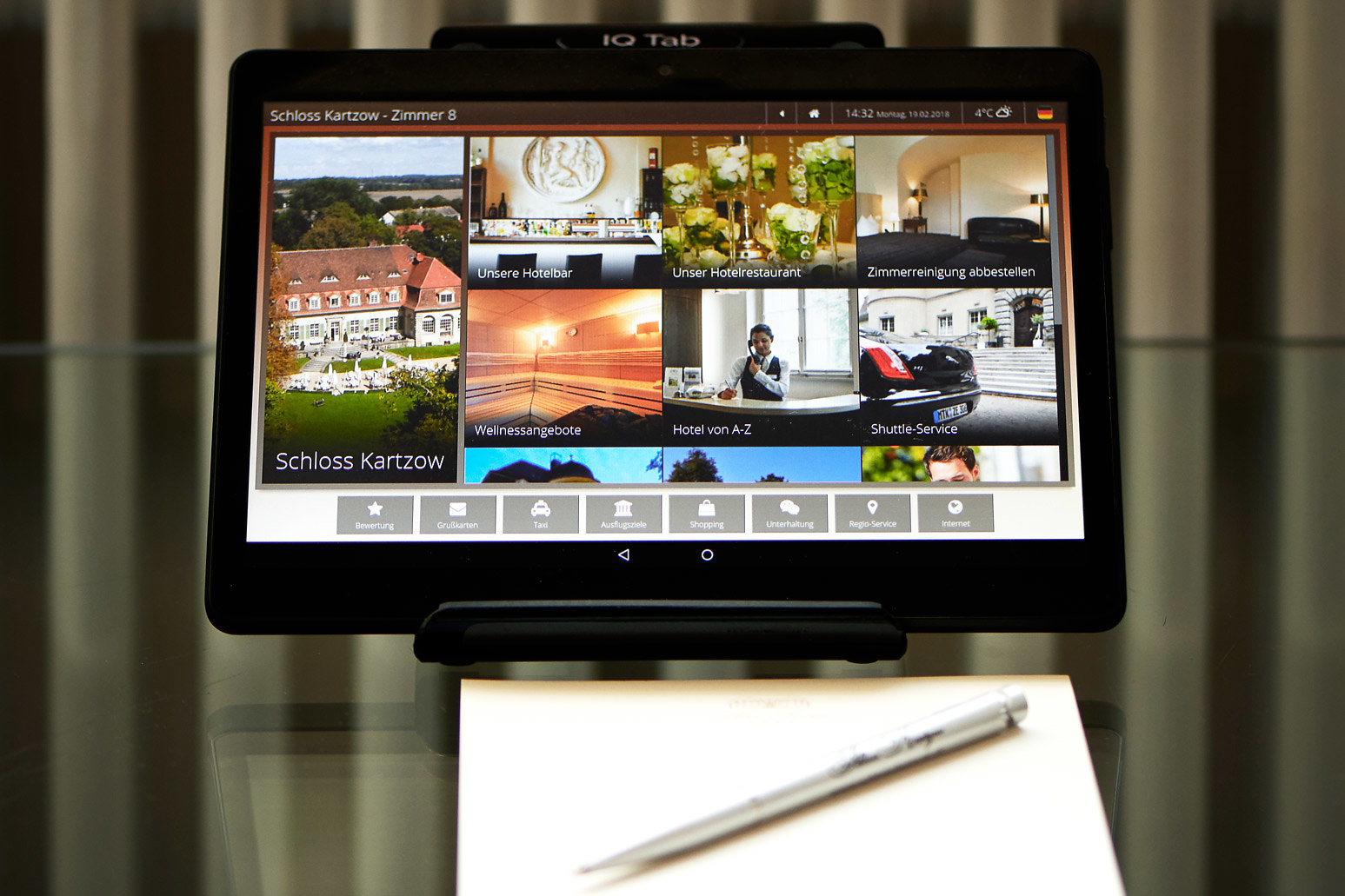 Since the opening and the first wedding in 2007, Schloss Kartzow has made a name for itself regionally and internationally as a conference venue, as a wedding location and as a hotel. This success is supported by the exquisite cuisine, which at the heart of the hotel inspires guests with exclusive creations – and is complemented by the stylish service.

“Because the house is so small, I try to create as many unique selling points as possible.”

In order to surprise and delight the regulars with the “special”, the furnishings of the house and the rooms and suites are changed regularly. Another unique feature is the Betterspace iQ Tabs: More than a comfortable digital guest folder. In all double rooms and suites, guests can use the Betterspace iQ tabs as a free service. The tablet PCs are easy to use and offer a high added value. So one can inform oneself about offers and the service and – thanks to the integrated menu – comfortably about the restaurant. Another advantage: The iQ tabs make it easy to surf the web or read magazines.

“I always want to know where the trend is and what moves my guests. That’s why I often take care of the check in myself. “

The next project is also a challenge something special: The healing water source laying under the castle Park is to be reactivated. With a bit of luck, guests at Schloss Kartzow can soon do something good for their own health with the Schloss Kartzow Wasser.